Mrs. Lodema Adaline Linfor, daughter of William and Adaline Taylor, was born December 25, 1850, and died at the Odd Fellows Home at Mason City on December 21, 1927, at the age of 76 years, 11 months and 26 days, after a few weeks’ illness, caused from cancer of the stomach.  [Ed. Note:  Lodema’s death certificate lists her mother’s maiden name as Betsey Chase, which is in other vital records, and cause of death as cancer of the liver.]

She was united in marriage to William Henry Linfor July 21, 1875 at Walnut.  To this union six children were born, Charles, of Sioux City; Claude, of Des Moines; Alva, of Clarion; Mrs. Clara Johnston, of Walnut, who are left to mourn her death.  Fredrick deceased in infancy, and Elsie who passed away in 1907.  Her husband died February 18, 1923.

Mrs. Linfor was a member of the Presbyterian church and of Estella Rebekah lodge of this city.

Beside her children she leaves eleven grandchildren, two step-sons, one step-daughter and seven step-grandchildren.

Funeral services were held at the Rieck Bros. undertaking parlors in Walnut, Friday afternoon at two o’clock, and interment made in the Walnut cemetery.  Rev. Thos. Hill, of the Presbyterian church, had charge of the services. 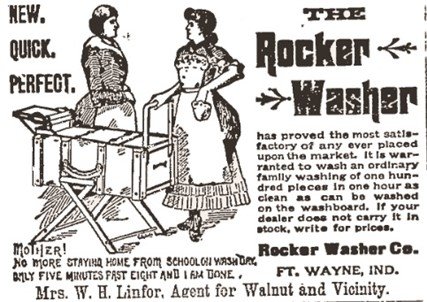