VETERANS OF THE CIVIL WAR FROM WALNUT, IOWA

David S. Brown and his wife, Pauline M. Brown are buried at the Layton Township Cemetery and their gravestone gives their dates of death, but when I looked for their obituaries, I had no luck. He died on May 27, 1904 and she died on June 1, 1913, but there were no Walnut Bureau newspapers on our microfilm for the dates that should have contained their obits.

I did find a Card of Thanks in the June 12, 1913 paper: “To our many friends and neighbors who so kindly assisted us with aid and sympathy at the burial of our dear mother, we offer our heartfelt thanks. MRS. J. W. CRAIG. MRS. J. M. COLLIER.”

We do have an obit for J. W. Craig and a short one for his wife, Hada Brown Craig, who died in 1917, only 4 years after her mother. Hada Brown married Joseph Webster Craig in Walnut on February 6, 1881. They are buried beside her parents in the Layton Township Cemetery in Section D block 23 lot 12.

A visit to the Avoca Library proved productive, as I found this contribution from The Walnut Bureau: “David S. Brown, formerly of this city, died May 27 at Sterling, Col. He was 74 years of age.” (The Avoca Tribune, June 10, 1904, p. 5) How interesting that they had shipped his body back to Walnut for burial.

Trying to find information on the Browns in Colorado, I emailed the Denver Library. Sarah Gilmor was very helpful and found this “Card of Thanks. I wish to thank our many friends and the good people of Sterling for their kindness, and service rendered during the sickness and death of my dear husband, and especially, I wish to thank the old sholders (soldiers), his comrades and the Redmen Lodge of Sterling.” MRS. D. S. BROWN.” (Logan County Advocate, June 2, 1904, p. 5)

She was not able to find an obituary for David, but found the following 2 articles: “Mrs. Pauline M. Brown, mother of Mrs. L. J. Collier, died at the home of her daughter here Sunday evening after an illness of five months. The deceased was 73 years of age. Funeral services were held this afternoon at the home. Rev. Dr. B. G. Mitchell officiating. The remains will be shipped east this evening.” (Sterling Evening Advocate, June 2, 1913, p. 3) “PAULINE M. HADLEY-BROWN, Pauline M. Hadley was born January 30, 1839, in the state of Ohio. She moved to the state of Illinois with her parents when a child. She was married to David Brown June 24, 1855. She was the mother of five children, four of whom are living, being Byron B. Brown of Manitou, Colo.; Ida B. Collier of Sterling, Colo.; Ada (Hada) M. Craig of Walnut, Iowa; James W. Brown of Idaho Falls, Idaho, who survive her, and Ada D., who died in infancy. There were sixteen grandchildren to mourn her loss. She died June 1, 1913, after an illness of five months, aged seventy-three years, four months and one day. (Sterling Republican Advocate, June 5, 1913, p. 4)

The Reference Librarian also sent a copy of David’s pension application. David S. Brown was in Co. D 52nd Illinois Infantry. From Iowa, he applied for an invalid pension on April 9, 1897. From Colorado, his widow, Paulina M. Brown, applied for a widow’s pension on July 1, 1904.

In the 1885 Iowa Census, Ida B., 25, and John W., 20, were listed with David S. and Paul(i)na. John is really James Wm. Brown who was 26 when he married Eva F. Willits, daughter of C. S. Willits and M. Menefee, in Council Bluffs, Iowa in 1890. Another marriage record listed his name by the initials J. W. On October 20, 1923, he married Ellen Hendricks Johnson in Cedar Rapids, Iowa. (Information from familysearch.org)

David Brown and family were living in SW1/4 NW1/4 section 16 north and across from the Lincoln Township Cemetery in 1885, where Wayne Johnks live now. Ida was a schoolteacher.

On August 17, 1886, David S. Brown bought Lots 1 & 2 Block 4 in Noe’s Addition in Walnut. This is the house at 719 Antique City Drive, which is east across the street from the Catholic Church.

We have an article from the Walnut newspaper of 02/06/1891 that reads:  “D. S. Brown will have a public sale at his residence, 6 miles south and 1/2 mile west of Walnut, next Thursday, the 12th inst., at which he will sell 8 head of horses, 9 head of cattle, 15 head of hogs and a lot of farm machinery.  He will give a year time on all sums over $10, and allow 8 per cent discount for cash.  Free lunch will be served.  Scott Sankey will cry the sale.”

David, 64, and Paulina Brown, 56, were in Walnut in the 1895 Iowa Census. Their religion was listed as Presbyterian, so I checked our First Presbyterian Church records. David Brown joined the church on March 17, 1878 and was received by faith. A Mrs. Brown was baptized on May 15, 1887. I believe that there were 3 David Browns in Walnut in 1880, so I don’t know which one this might be. 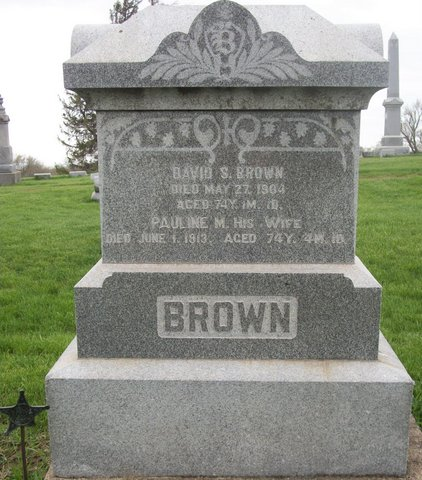