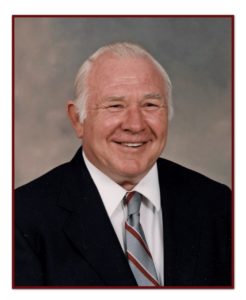 Louie Mike Troll, the only child of William and Alma (Fideler) Troll, was born on May 22, 1930, in Harlan, Iowa. He was baptized in Delmont, South Dakota, and grew up on the family farm north of Walnut, Iowa. Louie attended Monroe Country School through the eighth grade and graduated from Harlan High School in 1948.

On May 3, 1953, Louie married Lois Evelyn Eilts at Zion Lutheran Church in Atlantic, Iowa. The couple then farmed and Louie also drove truck and sold seed corn. They moved into Walnut in 1982, and Louie drove the school bus for Walnut Community Schools for 36 years and served as the transportation director for a time. He lovingly referred to the school bus children as his “kids”.

Louie was a longtime active member of Immanuel Lutheran Church in Harlan, Iowa, where he was confirmed as a young man and later served on the church council. He was a 4-H leader and coach for the chicken judging team that advanced to the Iowa State Fair, and he also judged chickens at the County Fair level. As “Santa”, Louie brought delight to many Walnut area children for over 40 years. He loved gardening, mowing the yard, and playing cards with friends. He and Lois enjoyed traveling, and during their later years, they took bus trips around the United States. They had the privilege of hosting two foreign exchange students from Germany, Lydia Seus and Lorenz Kock. Family was very precious to Louie, and his grandchildren were quite special to him.

Louie M. Troll died on Thursday, December 31, 2020, at the Cass County Memorial Hospital in Atlantic, Iowa. He had reached the age of 90 years, 7 months, and 9 days.