Veterans of the Civil War – James A. Casey

VETERANS OF THE CIVIL WAR: JAMES A. CASEY

James Casey, a much respected Council Bluffs citizen, died on the 30th ult. [of the past month].  (The Walnut Bureau, Friday, December 6, 1889)

James A. Casey died at his residence in Council Bluffs, last Saturday afternoon of pneumonia, after a brief illness.  The deceased was for many years a resident of this place, removing to Council Bluffs some three years ago.  He was born in Clare, Ireland and was aged 43 years.  He served his chosen country in the war of the rebellion, and at the time of his death was a member of John A. Dix post G.A.R. of this place.  A wife and five children feel most keenly his loss, while other relatives deeply mourn his demise.  The remains were taken to Lincoln, Neb., for burial. (The Walnut Bureau, Friday, December 6, 1889)

James Casey has opened up a livery and feed stable, on High street, in the building formerly occupied by Carstensen Brothers, as a blacksmith shop.  Mr. C. has things in neat shape, and should have a share of the patronage.  (The Walnut Bureau, April 9, 1885) 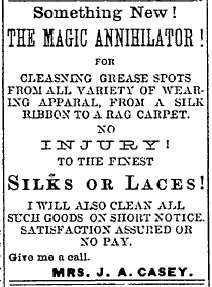 Jimmy, the son of James Casey, who keeps a feed store at 805 Broadway, had his arm dislocated last night about  o’clock by being thrown from his pony, a slipping saddle causing the animal to plunge and thus free himself of his rider.  The dislocation was reduced by Dr. Cappell, the youth enduring the operation as well as the pain from the accident without a murmur.­- Globe, of Saturday.  (The Walnut Bureau, June 23, 1887)

[There were many James Caseys who served in the Civil War in Iowa, so I am not certain in which group he served.  I browsed the 1880 Census for Layton Township and for Walnut and did not find James, although John and Patrick Casey from Ireland had businesses here.]