One of Walnut’s Most Respected Citizens.–Was Prominent Mason

A pall of sorrow was cast upon this community Saturday morning by the announcement of the sudden death of F. M. Allee at his home in the northeast part of town. He arose Saturday morning, in what he supposed his usual health, and was about doing some little chores, when his heart began to trouble him. He returned to the house expecting no further trouble, when he expired in a few moments. His death was a great shock to his many friends and neighbors; it was so sudden and unexpected.

F. M. was the son of Limus and Sarah A. Warner Allee. Limus’ parents were Quakers who came from the north of Ireland at an early day, settling on a farm in Hancock County, Indiana. Limus was born there, but moved to Parke County when he was a young man. He was a carpenter by trade and they had 7 children: F. M., John, William, Mary E., Martha, Susan and Etta. Sarah Allee died in Parke County from an accident caused by her clothes catching on fire. Mr. Limus Allee was married a second time, to Ruth Higgins. They moved to Vermillion County, Illinois in 1857 and he bought a farm there and died in 1859. Limus belonged to the Methodist Episcopal Church and had served as Assessor of his township. He was a man of sterling integrity and industrious habits.

F. M.’s early life was spent in his native state. When President Lincoln called for volunteers to protect his country’s flag, Mr. Allee enlisted, although he was only a boy of seventeen. Throughout the long struggle, 3 years and 7 months, he served his country as a member of the Ninth Indiana Battery. He participated in the engagement at Shiloh, April 6 and 7, 1862 and in several other battles and many skirmishes. He was on the steamer Eclipse at Jonesville, Tennessee, January 25, 1865, when the boiler exploded. He was thrown out into the river, sustaining a slight injury in the shoulder [a severe wound by one account]. Francis never received a gunshot wound while in the service, although he remained at the front until the close of the war. He was under Rosecrans, and his corps, the Sixteenth, was commanded by General A. J. Smith. They followed General Price, the noted Confederate General, from St. Louis, across the State of Missouri to Kansas City, where a battle was fought at Big Blue River, and thence from Kansas City into Kansas, then back to Glasgow, Missouri, where the army went into camp for election; was in the battle of Nashville. He was honorably discharged at Indianapolis, Indiana, June 26, 1865, being then just twenty-one years of age. Thus the days of his earliest manhood were spent in defense of his country.

On Oct. 5, 1865, Francis was united in marriage in Parke County, Indiana, to Miss Nancy C. Wolf, daughter of Joseph and Elizabeth Wolfe. To F. M. and Nancy, one son, Preston, and one daughter, May, were born, the latter dying in infancy. Preston married Ora Ratcliff, settled on a farm in Indiana, and had one daughter, Nellie.

Mr. and Mrs. William R. Griffith were the parents of nine children: Mary E., William W., Mahlon, Theodore (who died at the age of twelve years), Almon, John R., Perry, Edgar G. and Leahann. [According to the 1891 History] But, according to the 1907 History, their family numbered twelve children, of whom Mrs. Allee was the eldest, and the others still living were: Alderman, Almon and Edgar, who were residents of Hancock, Iowa; John, whose home was in Walnut, Iowa; Leahann, the wife of H. V. Van Beck, of Hancock, Iowa; and Worthington, of Clarks, Nebraska. Five of the family were deceased.

William R. Griffith lived in Belmont County, Ohio for some years; then moved to Muskingum County, Ohio and in 1865 settled in Parke County, Indiana. In 1877 he came to Pottawattamie County, and settled on a farm in Valley Township, where he resided in 1891 and was 67 years old. Mr. and Mrs. Griffith were members of the Methodist Church. Politically he was a Democrat. He was of Welsh descent, a man of great force of character and upright morals, and had labored hard to lead a just and honorable life. William R. Griffith died in the year 1893, but in 1907, the mother still survived at the age of eighty years and was living in Hancock, Iowa.

Mary E. Griffith spent her girlhood days under the parental roof and was trained in the labors of the household, so that she was well qualified to take charge of a home of her own at the time of her first marriage. In 1868 she became the wife of Benjamin Huxford, who died on the 2nd of February, 1873. She was married again to Francis M. Allee in 1877.

F. M. and Mary came to Pottawattamie County in 1880 and bought a farm southwest of Walnut in Lincoln Township, which he at once began to cultivate. They are listed as owners of the northeast quarter of section 6 of Lincoln Township on our 1885 and 1902 maps. As the years passed, he continued further development and improvement of the land, transforming it into a fine property, from which he annually gathered good harvests as a reward for the care and labor he bestowed on the fields. Francis M. Allee had a farm sale at his farm, 4 miles south and 1 1/2 miles west of Walnut, on Thursday, Feb. 23, 1888. Horses, cattle and farm machinery were sold. (The Walnut Bureau, Friday morning, February 17, 1888, p. 4)

He continued actively in the work of the farm until the fall of 1891, [according to his obituary from 1906], or until 1902, [according to the 1907 history]. When, having acquired a handsome competence, he put aside further business cares and took up his abode in the village of Walnut, where his remaining days were passed. Our county property records show that on March 2, 1903, F. M. bought 607 Country Street, later the home of Orval and Helen Nielsen. Preston Allee sold the property on Feb. 27, 1920.

Rest was well merited, as it came to Francis in reward for his untiring labor and diligence in former years. He still retained the ownership of his farm, however, having one hundred and sixty acres in Lincoln Township, from which he derived a good income, and which remained his property up to the time of his demise.

In his political views Mr. Allee was a stalwart democrat and kept well informed on the questions and issues of the day. He held several local township offices, the duties of which he discharged with the same fidelity and stalwart purpose that characterized him in his army life when he followed the old flag upon the battle-fields of the south. Fraternally he was connected with the Masons and with the Odd Fellows, being a charter member of the lodges of those organizations in Walnut. He was also a member of John A. Dix Post, No. 408, G. A. R., and Mary was a member of the Eastern Star and Daughters of Rebekah at Walnut. Both attended and supported the Methodist Episcopal Church and in the community were held in high esteem.

The death of Mr. Allee, which occurred February 17, 1906, therefore was the occasion of deep and widespread regret. Mr. Allee was highly esteemed by a host of friends who appreciated his character and who sympathize with the stricken family in their great sorrow. “A kind husband, faithful father, thoughtful brother, upright citizen and a loyal friend has been taken from among us, and the entire community extends heartfelt sympathy to the loved ones.” He descended from old Revolutionary stock, his grandfather having fought in the battles for our independence.

The funeral services were held at the M. E. Church on Feb. 21 at 10 o’clock, the sermon being preached by Rev. J. C. Orth of the Presbyterian Church, assisted by Rev. Saunders of the M. E. Church. The Masonic order, of which he was an enthusiastic member, had charge of the remains and conducted the burial ceremony at the Walnut Cemetery. Beautiful floral offerings were made by the O. E. S., the Rebekahs, I. O. O. F., G. A. R. and the Masons.

His wife, son, two brothers, two sisters and a large circle of friends survived him.

In our October 2003 Antique City Roots, we had a photo of F. M. Allee with a group of Civil War Veterans. 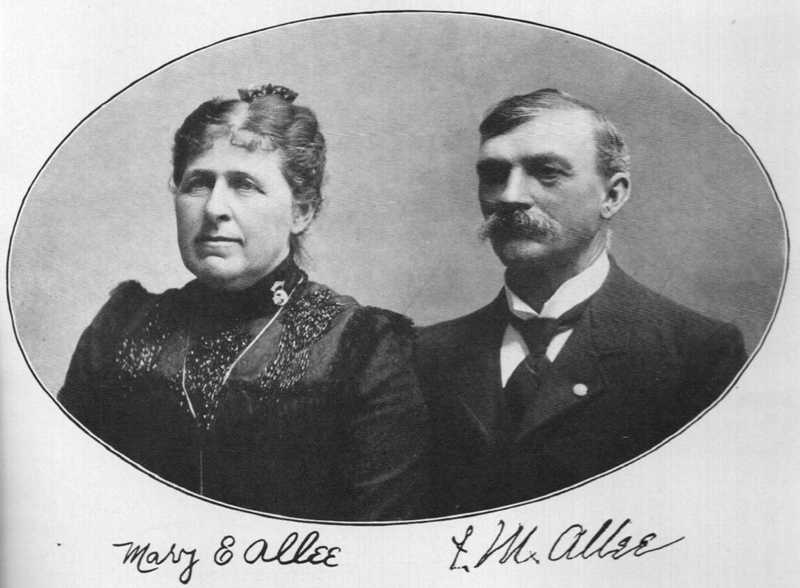