“Mr. and Mrs. Aaron Fell, another family who have lived in the eastern part of Wright township for a number of years, but who have moved up near Walnut, were the victims of a well planned surprise Wednesday of last week. Their neighbors and friends to the number of more than a half hundred happened in on them, bringing their dinner with them. The day was happily spent and every one regrets the departure of these good people for another neighborhood.—Griswold American.” (The Walnut Bureau, March 13, 1908)

On August 22, 1862 he enlisted in the Union army and served nineteen months in Company D 97 Ohio Vol. He was united in marriage to Miss Jane Phillipps, August 10th, 1871, who with their four sons and one daughter survives him. Shortly after his marriage he took his bride to Indian Territory where they resided fifteen months. He returned to Ohio and after four years in his old home he removed to West Virginia which was his home until the fall of 1883 when he came to Iowa where he has since resided.

Last fall he purchased a home just north of Walnut, where he had expected to spend the remaining days of his life. But he had scarcely become settled in his new home when that dread disease, pneumonia, overtook him, lingering only six days when death released his soul from its house of clay.

The deceased was a hardworking upright citizen, highly esteemed by those who knew him. He was for many years a member of the Masonic order.

His burial took place on Thursday afternoon from the Presbyterian church, Rev. J. C. Orth officiating. His body was laid to rest in Walnut cemetery to await the Resurrection call.” (The Walnut Bureau, March 20, 1908, p. 1)

She was united in marriage to Aaron Fell, August 10th, 1871. They moved from Ohio in 1883 and later settled on a farm north of Walnut, where the husband and father passed away March 16th 1908. Mrs. Fell has made Walnut her home during the intervening years.

Mrs. Fell has been a member of the Estella Rebekah Lodge of Walnut for a number of years.

Mother, grandmother, friend,–she is gone but those who survive her will miss her because of that which she has meant to them.

‘We live in deeds not in years; in thoughts, not breaths; In feelings not in figures on the dial. We should count time by heart-throbs. He most lives who thinks most, feels noblest acts the best.’

Funeral services were conducted by Rev. Arthur F. Rumbaugh in the First Presbyterian Church of Walnut at 2:30 Sunday afternoon, September 21, 1930. Interment was made in the Walnut cemetery. (The Walnut Bureau, September 25, 1930, p. 1) 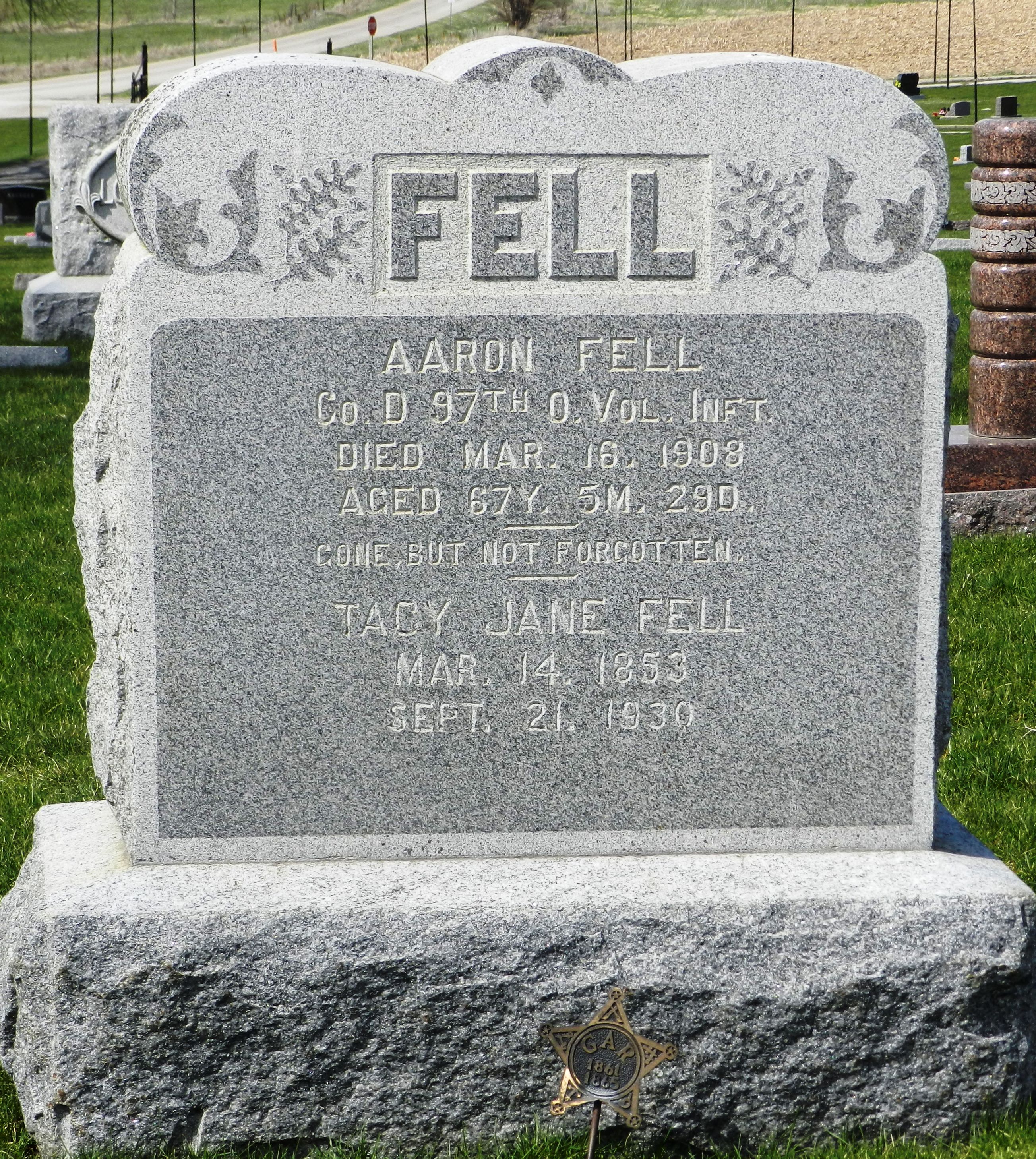